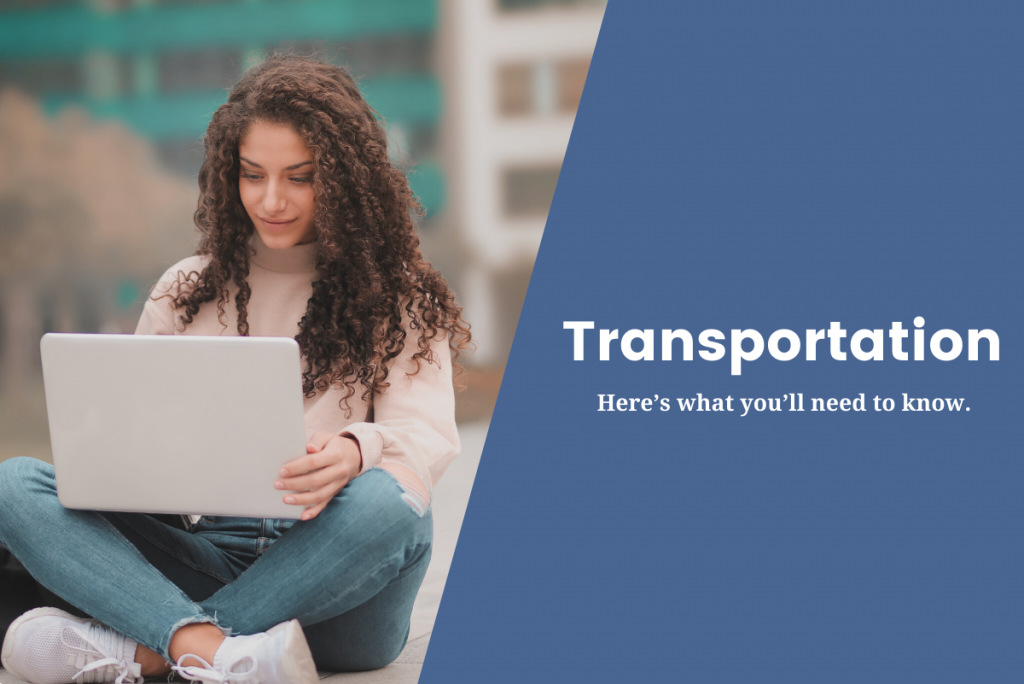 You’ve traveled far and wide to get to the USA and to start your education. But once you’ve found your way to your school’s campus and unpacked, you have to figure out how to get to the bank, grocery store, and campus bookstore. After all, even if you live on campus you might want to leave sometimes! And the way to do that is based on your transportation options.

Cars
If you move to an area for school that’s urban, odds are you probably won’t need a car to get around because you can walk everywhere (though in some areas it might be helpful every once in a while). But in most other types of areas, a car will be vital to your ability to go anywhere. Whether you lease or buy a car, there are literally hundreds of choices in terms of brand, type, safety features, color, fancy extras, and so on – and there are therefore lots of prices to choose from, too. So before you do any price research, first consider the most important components of a car you’ll need in your daily life. Once you have an idea of what you want and know your budget, check out prices but don’t forget to calculate additional costs such as gas (“petrol” if you’re from England and lots of other places), insurance, and on and on.

Every state has its own laws about driving age, testing, licenses, and even certain traffic violations. It’s possible that you’ll be allowed to use your license from your home country or an international license once you’re living in the USA – but getting car insurance for international students or short-term visitors may be much harder. So we suggest that you check the laws of the school’s state as part of the prep for your move so that you can pack any documents required for changing your license. And if you do plan on changing it, be prepared to take an exam or two to prove your driving expertise.

Again, safety and administrative laws differ per state and it’s important that you know what you’re legally required to do before you get anywhere near a car. But here are some general things to know:

Keep in mind that in the USA cars drive on the right. If you’re an international student from a country where you drive on the left, it’s not just the side of the road that will change – the driver sits on the opposite side, a car that’s manually operated will have gears on the right side instead of the left, and oncoming traffic moves in the opposite direction when you cross the street.

The majority of cars in the USA are automatic, and it’s actually pretty tough to find manual cars to buy or lease. Most Americans don’t even know how to drive one, so if you do manage to find a manual make sure to show off your driving skills to your new friends.

Pro tip: Join the American Automobile Association (AAA), a non-profit organization that provides roadside assistance, to get help when your car won’t start or the battery dies. Members of AAA also get access to travel information and maps, driving courses, and numerous other car-related topics.

Get a ride
If you think a car would be great on an occasional basis, you can still get the perks of using a car without buying or leasing one.

Taxis (also known as cabs) are available 24 hours a day to help you get from point A to point B. In big cities, you may be able to hail one as it drives past, but in other locations you may have to call and order one ahead of time. Taxis often charge a fixed amount per mile or per minute plus various fees, or a flat rate for common trips such as to the airport (possibly plus fees and/or tolls if relevant). In both situations, drivers usually expect to be tipped as well.

In the last few years, ride-hailing services like Uber, Lyft, and Via have multiplied, allowing customers to request a ride via an app on their phones. These services are popular all over the USA, but availability differs depending on the area.

If you want to be the actual driver, consider signing up for a car sharing service such as Zipcar or Maven. These differ from regular car rental companies, which are primarily used for longer-term rentals but either don’t rent to drivers under the age of 25 or charge extra to do so. These companies allow you to rent a car for the very short term – even just for an hour – from tons of locations such as local parking garages or office buildings, though they are sometimes only available in major cities.

Bicycles
It’s an American rite of passage to learn how to ride a bike as a child. But as adults, bikes don’t play a big role in our lives. Though there are always exceptions, rural and suburban residents reserve bike riding for weekend activities, and city dwellers sometimes use them to cover medium-length distances that are too far to walk but too close to want to deal with public transportation. There are bike lovers out there, though, and you could be one of them: If you live nearby your school’s campus or you live on campus but want to regularly go somewhere not that far away, you’ll probably want a bike. And if you get one, wear a helmet – though it’s only a law in some states, it’s a good idea in all of them.

Public transportation
Most major cities in the USA have two forms of public transportation: buses and subways. Some suburban areas also have buses, but they tend to be used less often due to the prevalence of cars. In rural areas, public transportation is poor to nonexistent. Some of the largest cities such as New York City, Washington, D.C., Los Angeles, Chicago, and several others also have a commuter rail, but, again, these are much more rare outside of the biggest metropolitan areas.

Every system is different in terms of overall type, fare breakdown, distance covered, lines offered, and so on. But no matter the variation, if you live in one of these cities, public transit will be the easiest, fastest, and cheapest way to get around, even if reliability is sometimes not so great.

Long-distance travel
Once you’ve finally settled into student life and acclimated to your neighborhood, you might want to visit another part of the USA. To do so, there are four main modes of transportation: air travel, driving, intercity bus, or train. Your best option will always be based on the distance you’re traveling, but each one has its own pros and cons.

Amtrak is the national rail service and has multiple amenities, but might have limited routes and can be expensive for the same trip you could do on a bus. National bus companies such as Greyhound, megabus, and BoltBus (and many, many more) travel long distances for cheap prices, but they’re subject to traffic and some argue that they’re more cramped than trains. Driving gives you the most flexibility but requires that you always pay attention, and flying is best for long distances but you have to deal with security lines and baggage limits. Essentially, the only advice we can give you is that you’ll have to figure out how to travel around the USA on your own.