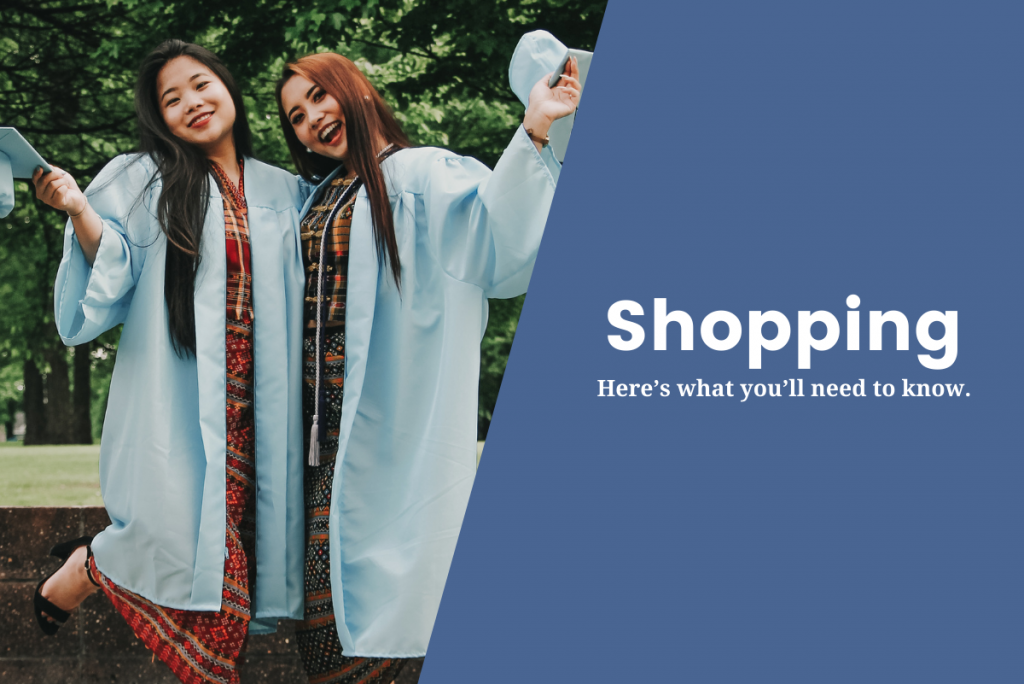 We know, everyone shops online these days. But just in case you decide to go shopping to a real, physical store, you should have insider knowledge about what to look for and how to get the best deals.

Things to know
The hours of operation for every store is different, depending on the type of store, the day of the week, the location, and several other factors. On average – which is tough to really say in this case – many stores open at 9 am and close at 8 pm on Monday to Friday. Saturday hours may be the same or shortened, and on Sundays stores often have fairly shortened hours or are closed. This generally applies to stores that sell clothing, electronics, household goods, and so on, as well as often to shops that offer services such as dry cleaning or haircuts. Usually, grocery stores have the longest hours, with some open 24 hours. But always, always check before you make your way to the post office in the rain and then find out it’s closed.

Several states and cities or counties have recently enacted a bag tax, which charges the customer a small fee to use bags provided by the store. The amount charged varies, as does the type of bag you’re charged for, but the idea behind these laws are the same – to greatly reduce the number of bags that eventually sit in landfills. These taxes includes pretty much every kind of store, including grocery stores, clothing stores, toy stores, etc., so it’s a good idea to keep reusable bags or old shopping bags on you if you think you’ll be doing some shopping.

Americans love a sale. Though some stores will offer sales on a somewhat regular basis or for certain items, others offer bigger deals for holidays, back to school, or at the end of seasons. And if you’ve heard of Black Friday, you won’t be disappointed because stores offer sometimes extremely reduced prices that day.

Sales tax
Unlike in most countries, where sales tax is automatically included into the price of an item so that a shirt marked €20 will have the final price of €20, there is no national sales tax in the USA. Most states have their own sales tax percentage – which is added on to the bill when you are at the register to pay – so a shirt marked $20 will have a higher final price. To make things even more complicated, the sales tax percentage is different in every state (and sometimes even in various cities), so that $20 shirt will cost you a different final price throughout the country. And, extra extra complicated, some states don’t have any sales tax.

To add even more complications: Many states don’t tax on groceries, some differentiate between groceries and candy, and some make those distinctions in grocery stores but not in other types of stores that sell the same items. Prepared foods (such as food you’re served in a restaurant or food court) may be taxed, medicine might not be, and so on. Online purchases may be taxed even if the store you order from doesn’t have a physical presence in your state. Essentially, don’t make any assumptions about prices and be prepared to pay additional money for many items you purchase.

Discount cards
One of the best ways to save money on a daily or weekly basis is to get a rewards card from grocery stores, drugstores, clothing and shoe stores, etc. These cards are free to sign up for and are not linked to any bank or credit card account but instead give you access to sale prices and sometimes additional discounts or rewards. The more you save on cereal every week, the more money you’ll have to put towards paying back your student loans, right?

Some department stores and other larger chains do have their own credit cards, however, and will try to entice you to open one by offering discounts and additional discounts. Some of these cards only are able to be used at that store while others let you use them anywhere, but all of them are actual credit cards and can affect your credit score.

Return policies
Like most things, store return policies vary greatly in the USA. Some stores don’t accept returns at all but will offer exchanges, some allow you to return within 90 days and some only two weeks, and so on. Most stores will accept returns of unopened merchandise as long as you have the original receipt, and some stores even accept returns of opened merchandise as long as it’s not damaged – but that’s up to the store. If the item was a gift, you may need to use a gift receipt (provided to you by the original purchaser), which proves that the item is from that store but does not list the price. But every store should have their return and exchange policy available and in a public place, so make sure you know the store’s guidelines if you’re unsure about the product you’re buying.

Clothing
We know you’ve been clothes shopping numerous times before, but there are a few different details to think about when you’re trying on clothes in the USA.

Men’s clothing sizes are measured in inches – as in, a 17-inch neck – and are 10 lower in the USA than in Europe. So if you’re a 56 in France, you’ll be a 46 in the USA. Some clothing is instead labeled with general size breakdowns such as XS to XL (extra small to extra large).

Clothing for women is split into several categories, and all of them use either numbers or general size breakdowns. Juniors is for adolescents and teenagers, and sizes are designated by odd numbers (e.g. size 7). Misses is for most average-sized women and sizes are designated by even numbers (e.g. size 6). For women who are shorter than average – generally under 5’4” – the petite section offers the same even-numbered sizes but with smaller proportions and are labeled with a P (e.g. size 6P). Women who are taller than the average 5’9” can find tall sizes, again with even-numbered sizes but labeled with a T (e.g. size 6T). Plus sizes (also known as the “women’s” section) are for women who are heavier than the average woman, with sizes running to higher numbers and labeled with a W (e.g. size 20W).

For both men and women, shoe sizes in the USA are not the same as they are in other countries, and of course sizes vary per country anyway. Though you can find charts online, it’s probably easier to shop for your first pair in a store so you can ask the salesperson for suggestions and try on a bunch of American sizes to confirm the right one. Even better, go to a shopping center or, say, the Mall of America (really anywhere with multiple shoe stores), and compare and contrast how different brands and sizes fit.